Let me introduce myself, I am Luigi, head of the historic Rabino company. I took the helm after years of hard work and experience under the guidance of my father and my grandfather, who were preceded by their ancestors.

I am the founder of Coalvi, the Consortium for the Protection of the Piedmontese Breed, which since 1984 guarantees the origin and quality of beef.

I have always had at heart the protection of the territory and its products, intimately linked to it, and I have translated this passion of mine into a farm, but above all into a winery, of maximum excellence.

Today I mainly manage the breeding, given my close relationship with Piedmontese cattle, and I gradually leave the reins of the winery to my son Paolo.

Daniela, my wife, has been by my side all along the way, contributing in an essential way in the corporate structure.

My partner since the days of the wine school, over the years has held the reins of the administrative and bureaucratic aspects of our company, as well as taking care of the reception and advising me in all the productive choices.

She too, together with me, begins today to pass on her experience to our son and Adelaide, his girlfriend.

Paolo lives immersed in the world of the cellar, of which he is gradually becoming responsible, following my path and that of the Rabino men who preceded me.

He studied oenology like my wife and I, but he did it in different years, with a technological imprint that we lack a bit.

This is why he has total freedom to experiment, and always manages to surprise us with new projects, which develop from the vineyard to the bottling.

Silvia, currently living in France, is in charge of marketing and follows the Company from the point of view of Social Media.

If you are lucky during your stay you can meet an extra Rabino at our winery!

Adelaide is more or less the Jolly of the company, since we all need her help!

Her studies in the promotion of territorial tourism of culture and wine make her prone to hospitality, supported by a diploma from the linguistic high school.

She helps Paolo in the cellar, learning the art of winemaking quickly and with interest.

The only sector in which she is not involved is that of breeding, which I prefer to manage independently… for now!

“This is today’s team, which contains all the knowledge of the previous Rabino men. An ancient story, made of challenges and bets, sometimes successful, others not. All fundamental to get here.”

The first traces of our family date back to the Middle Ages. The Rabinos, at the time lords of Bosia and Borgomale, were forced to flee the Alta Langa to protect themselves from frequent barbarian invasions.

They found refuge in the Roero hills, in a valley that took the name Rabini.

These lands that have welcomed us, the same ones that we still work and protect today, remained in the hands of our family over the centuries, allowing us to derive our livelihood through farming and cultivation.

Wine production started in the mid-1800s: Antonio Rabino decided to buy some wooden barrels and make wine from his own grapes, a practice that was not very popular at the time. 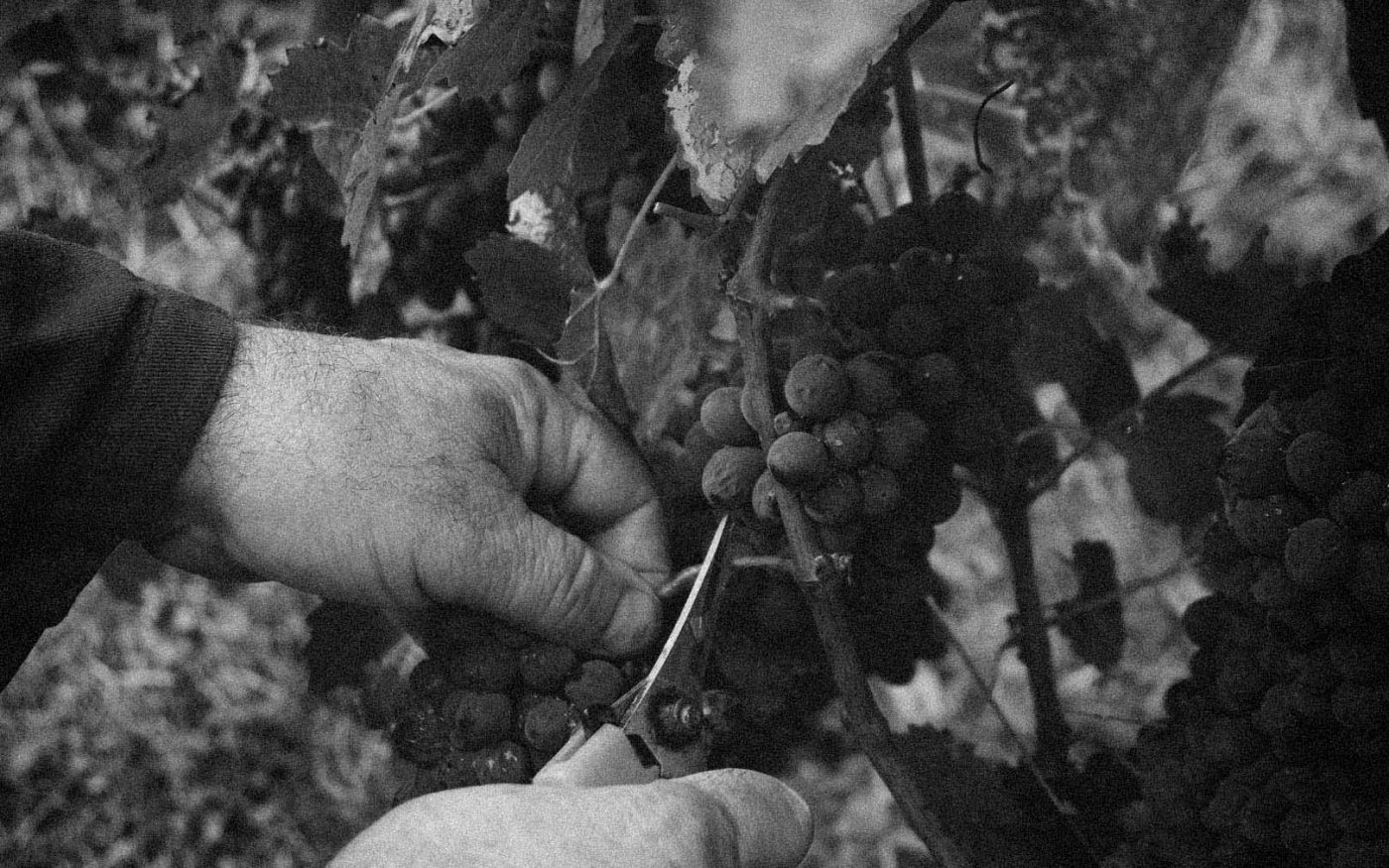 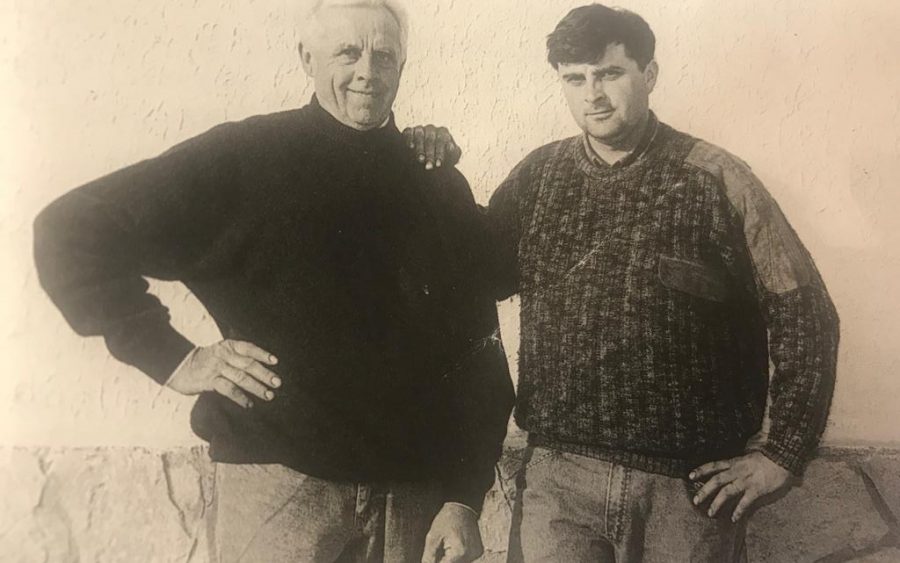 The first liters were reserved for family and friends, and didn’t represent any source of income, but Antonio dreamt of sharing with others what quickly became a passion.

Thus he began to bottle, at a time when the concept of marketing of wine didn’t yet exist.

He was one of the first to sell in bottles and, given the growing demand, seeing great potential in this small production.

He decided to teach his son Luigi the job, and years later also to his nephew Giovanni, my father.

During the period before the world wars many of the varieties still produced were already bottled: Barbera, Nebbiolo, Grignolino, Bonarda, Freisa and also the white Arneis and Favorita. 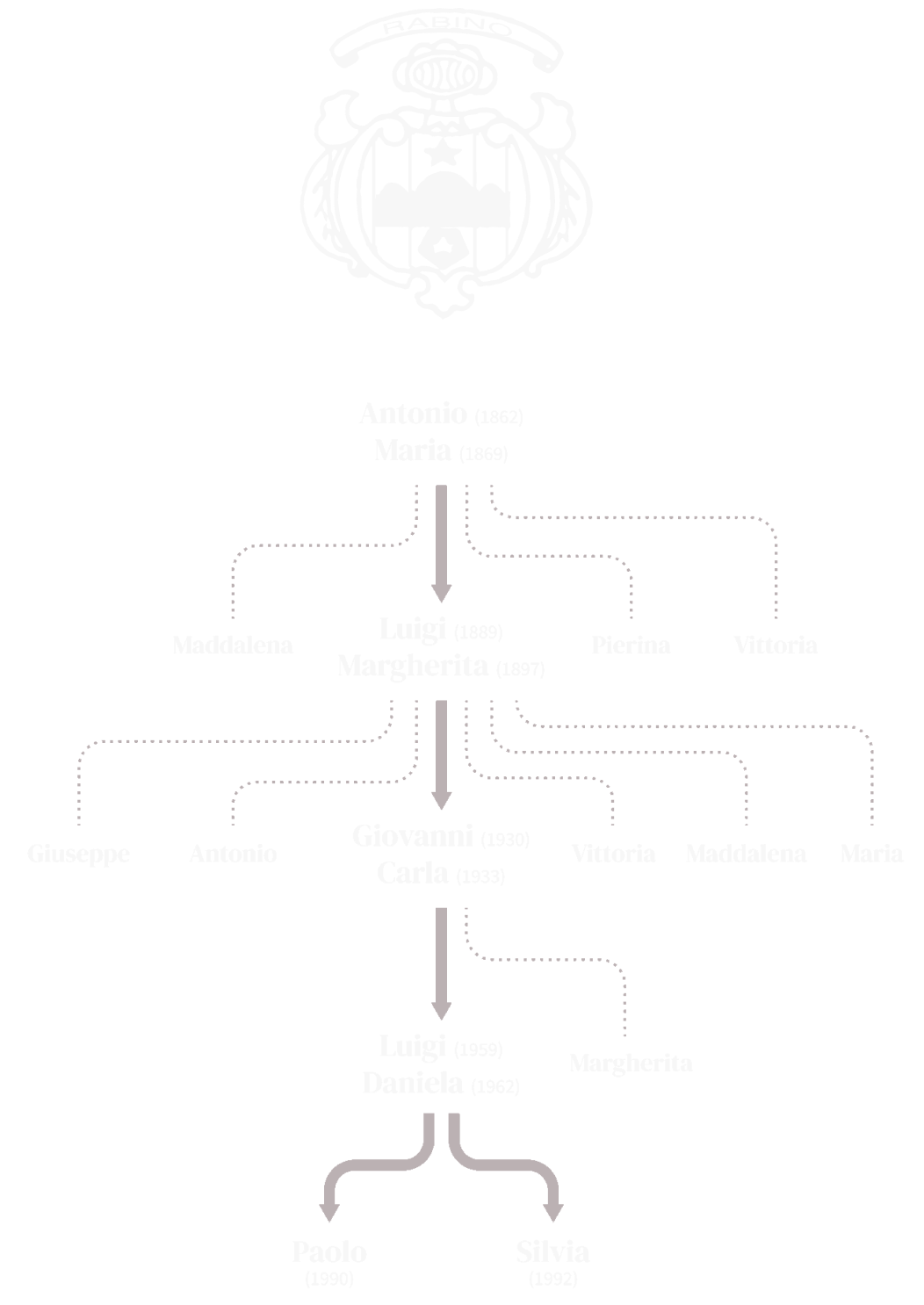 Our history has a central role in defining us, because it echoes the peasant “common sense”, a link with the territory that has lasted for centuries.

For this reason we have chosen to keep the emblem of our family on the label.

In the center, three hills symbolize the three founding brothers of the company. Above a helmet and a halberd remind us of our medieval origins.

The emblem is also represented on the cellar wall, together with our historical motto: “Docet Ducit”, teache and lead.

From the time of Antonio to today many men have followed one another, teaching each other the art of working the land, trampling the same fields and taking care of the same vineyards.

The continuity of our centuries-old history has meant that from generation to generation the experience was preserved, gradually adding bricks to what is now a solid and protective wall, which allows us to always focus on quality.

Over time, the company has evolved by adopting the most modern techniques for processing, but remaining faithful to the cycle of nature.

We can define ourselves sustainable, as almost all the resources used are produced directly in the company. 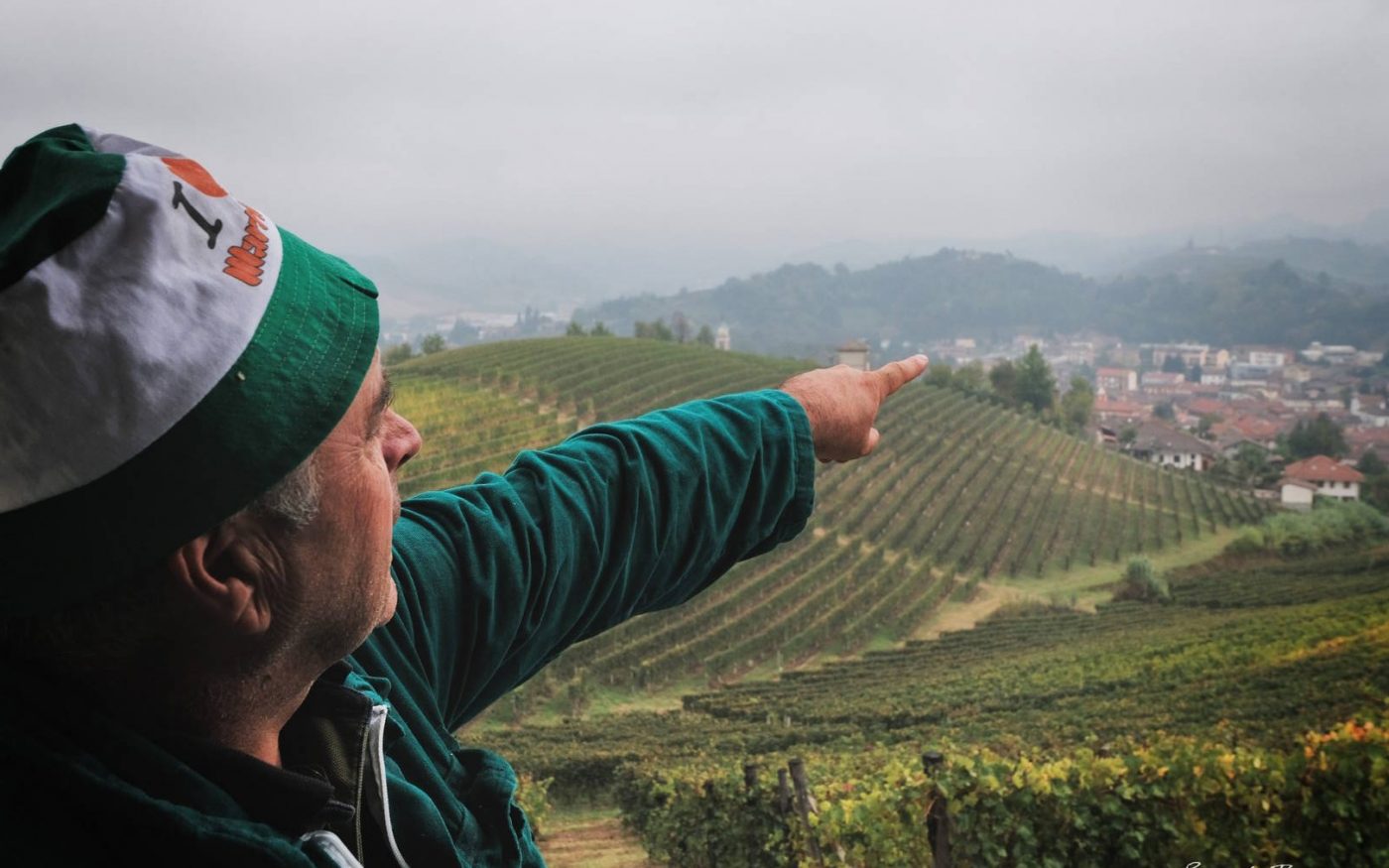 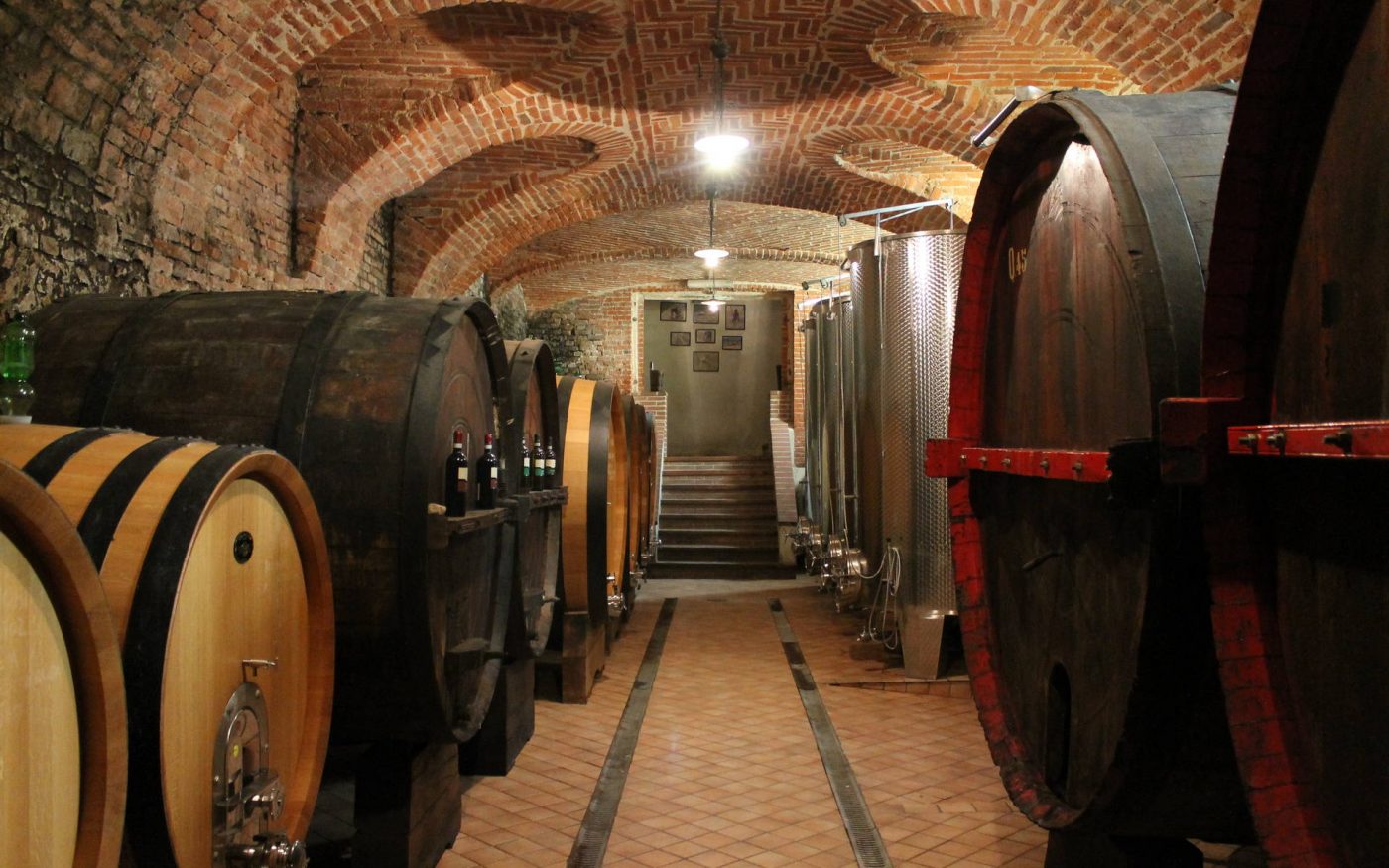 Even today, the wines are refined in oak barrels between the stone and brick walls of the crutin, the hand-dug cellar from the seventeenth century.

We are a traditional mixed-type company, more similar to those of the past, dedicating ourselves not only to wine, but also to breeding Piedmontese cattle and cultivating fruit trees: the “tonda e gentile” Langhe hazelnut and ancient apricot varieties.

To testify to the value we give to the well-being of the territory, we have succeeded today in creating an almost self-sufficient system.

Our diversified production makes it possible to supply at “m 0” (literally) some fundamental ingredients for quality production.

In the well in the courtyard we collect rainwater, which is micro-filtered and reused to water the animals as well as for work on the farm.

The cows produce natural fertilizers for all 100 hectares of land: vineyards, orchards, fields.

The lands also contribute, providing us with fresh grass for the cows in summer, which partly becomes hay for the winter. 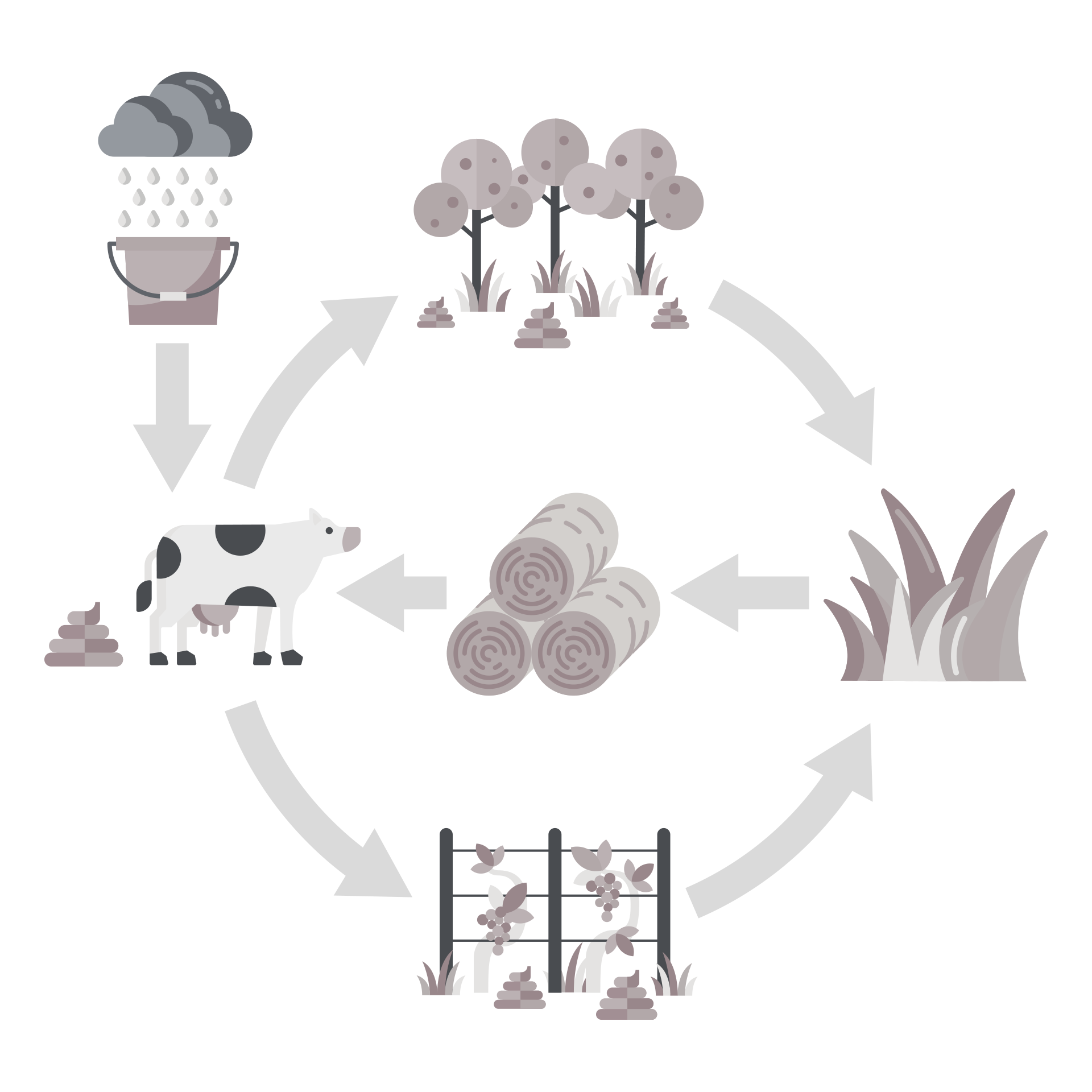 Since 2017 we’ve been producing clean and renewable energy through photovoltaic panels and we use solar energy for the production of hot water to be used for cleaning and sanitation in the cellar. 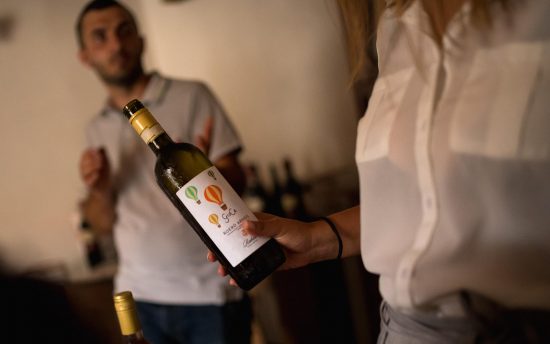 Our labels are representative of the tradition of Roero, Langhe and Monferrato and produced respecting biodiversity, from the vineyard to the cellar. We cultivate 25 hectares of vineyards with targeted and measured treatments, reducing the intervention of external actors thanks to a sustainable self-production cycle. 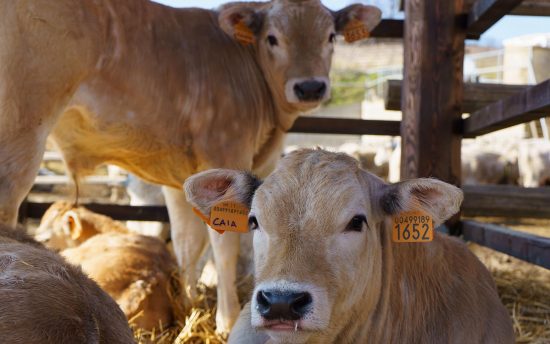 Our stable counts 220 heads of cattle, divided between beef cattle and mares. The well-being of the animal is always put in the foreground, with measures aimed at health, but also at the quality of life of the animals. Through a supply chain contract we sell all the cattle to the Macelleria Testa from Torino. 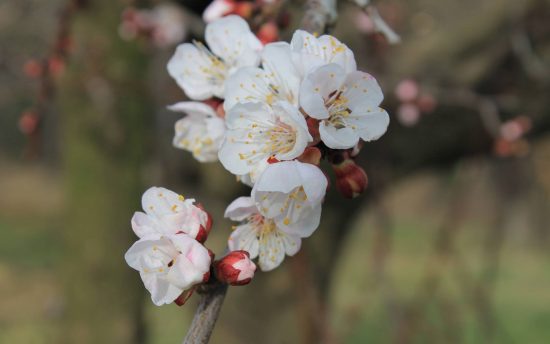 We complete our production with hazelnuts and apricots, which we partly sell as raw materials and partly process. A part of the hazelnuts is shelled and toasted, while the apricots that we can’t sell at the markets because of imperfections are turned into jam by a local small laboratory that shared our quality values.